Brimming over with post-party festive fun

It's been a great run-up to Christmas what with the Christmoustache Party AND the Xmas Covers.

We'll post some pics from the HT Party soon to show the kind of furry fun that ensued. In short though, we were treated to a We Show Up On Radar set that was short but very sweet and a wonderful version of Blue Christmas from Andy (sporting an equally wonderful moustache). Then Fists rampaged all over the stage. They'd been in the studio all day and drinking for at least a few hours so were considerably looser than usual - but all to the good as they tore into their ever-brilliant set (with a couple of new tunes in the shape of Angi's 50s-style swoon, Endlessly and Pete's Cramps-like Squeek Squirl - I'm completely guessing at the titles). James' onstage banter was AWESOME and Dave's rock stances (foot on bass drum, groin uncomfortably close to Tez's eyeline!) was the shizness.

Finally Hot Horizons took to the stage. I was taken aback by just how HUGE and ANTHEMIC they were. This was stadium pop. Bloody brilliant it was too!

After that, me and Bex got on the decks and caused a bit of a commotion to the likes of Passion Pit and Jay Z by way of Ace of Spades and Killing In The Name Of*

It was a great way for Hello Thor to round off a great year.
Even that though couldn't hold a candle to the institution that is the Damn You Christmas Covers Party. Now in its 6th Year (seems like more than that, no?) this is an opportunity for bands to do unlikely and thoroughly entertaining covers in the name of Mr Claus. My brother came along one year and even though Our Gaz doesn't often attend gigs once the Hellset Orchestra got stuck into Eye Of The Tiger he was loving it!

Some of my highlights from this year's Xmas Covers have to include: Wander Phantom's version of ODB's I Got Your Money, Fists' Breaking The Law & Kids In America, Din Din's whole set (gimp-masked electro!) and Burly Nagasaki's Winds Of Change of course

BOTH of Hello Thor's single releases in 09 have made the Artrocker Top 100 singles of the year list. Well done guys!!

There's lots of new music to get for free on the list, enjoy!

Bex
x
Posted by Supernight at 02:48 No comments:

Labels: artrocker, Fists, Hello Thor, singles of the year, top 100, We Show Up On Radar

On the 12th December Hello Thor are holding their Christmoustache Party at the Chameleon. Here's the poster: 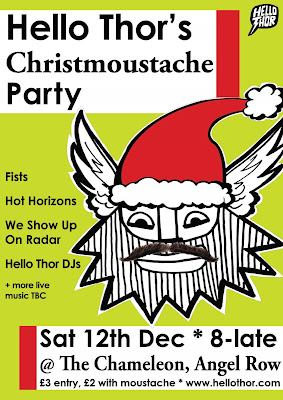 Hot Horizons will be playing (people in Seattle like them) alongside Fists, We Show Up On RadaR and probably the (whisper it) Tom Tomas Club... oh dear. Latest news is that Super Fun Team Go! will also be joining this line-up! Amazing!

Brilliant. It's £3 to get in, £2 if you are wearing a moustache. The bigger the better.

Oh, and Me & Anders will be DJing too. When I say I will be, I mean I'll be selecting songs and demanding that Anders plays them.