Anders is busy putting together the next Hello Thor Zine. The first was on the theme "The Secret of My Success" and was brilliant.

The theme for this one is:

We've already got some amazing entries in but we'd like more so please send us something. We're looking for doodles, illustrations, photos, scribbles etc etc. It will be lo-fi production so greyscale only please. All contributors will of course get a copy.

Email them to hellothorrecords@gmail.com
Thanks

Petebox just tweeted this video. It's him on the kids TV show Skillicious and is brilliant. Watch the kids trying to figure out how to dance during his opening show, I love their confused faces and some of the moves are amazing.

Bex
x
Posted by Supernight at 02:43 No comments:

Becky
x
Posted by Supernight at 03:33 No comments:

Now, just to explain before I start... The Sun isn't my daily newspaper of choice. To be absolutely clear about it... I think The Sun is pretty vile, a waste of many intelligent minds, many resources and a vehicle to promote some pretty horrible opinions in a mainstream way.

Anyway, there are a couple of things I want to pop up on here relating to The Sun:

Firstly, check this out for a pretty clear cut example of how hypocritical and self-serving The Sun is. How can they piggyback their anti-PM campaign onto a mother's grief and then blithely blunder on when they make the same mistake they lambasted him for?

Secondly, Ever noticed how Page 3 is used to shoehorn right-wing propaganda into people's brains via the medium of tits? Read this.
Check out Joey Chickenskin's Live Journal (link also on the side of the page) for a pretty funny example... I hope he's put it up there. (Note to Joey: Please tell the full story of how you came about this page of The Sun! Pretty please?!)

So, there we have two pretty plain, basic examples of why it's such a horror that The Sun is one of our most widely-read "newspapers".

Becky
x
Posted by Supernight at 05:27 No comments:

Me and Anders went down to London at the weekend for a couple of reasons:
- Some of our ACE friends live there and we don't get to see them enough
- I arranged it as a birthday present for Anders and got him tickets to see Daniel Johnston at the Union Chapel
- Fun

We drove down late on Friday and arrived in Dalston just late enough to chat a small amount with Jamie & Chloe (some of the afore-mentioned ace friends who we were staying with) before sleepytime.

Saturday we had big plans. Anders had a list of about 20 record shops he wanted to go to and I wanted to buy nice things that you can't buy in Nottingham. However, we also wanted to stay in our PJs and hang out with j and Chloe while eating bacon sandwiches, so we didn't actually make it out to start the big plan til about 1pm. We headed straight to Brick Lane and Rough Trade which is pretty exciting. It's a big warehouse-y type shop, all painted white and a bit scruffy with tons of records & cd's and lots of things on listening posts. This is pretty much the most exciting thing in the world to Anders, so he was off and lost to me for the next 3 hours. Whilst in there I saw something pretty cool: 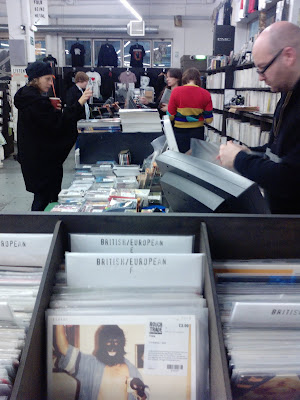 In case it just looks like a record shop this is the Fists single in Rough Trade! As Tez said... "British European..F.....". Indeed.

Anyway, after Anders' mammoth record binge we trundled off to Wahaca. It's the Mexican restaurant set up by the funny posh lady who won MasterChef - Thomasina.
It was GREAT. I don't think I've ever eaten Mexican food before... not like that anyway. I had a mole (as well as about 12 other things, we rather over-ordered), which was rich and chocolatey and really well-spiced and just amazing. I also had Pork Scratchings, which were like huge quavers and not at all like the things you get in the pub. Mmmm delicious.

Saturday night was Halloween party night, which in London doesn't mean hopping in a cab for five mins to get into town. It means traipsing for an hour and a half on bus, train and foot to get to your friend's house. We had much fun dressing up and knew our costumes had succeeded when a small child on the street said "you guys are scary". The most fun part though was the train journey. Lemoncello zombies are the coolest: 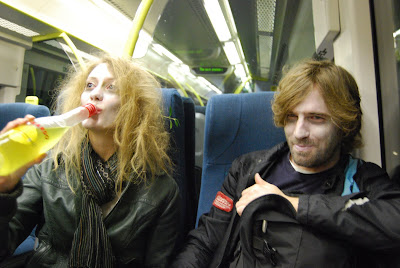 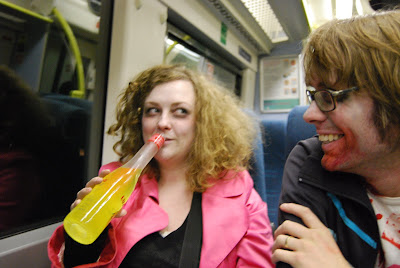 At the party there was a Queen of Darkness, a mad doctor, 2 spiders/octopi, various generic halloween-y creations, Cruella De Ville and, of course, Boris Johnson. 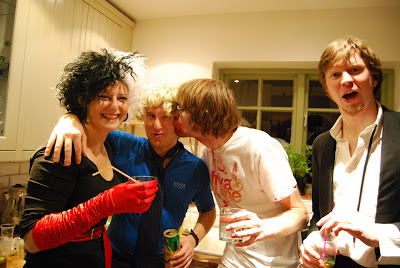 Sunday was a lovely day of relaxing, croissants for breakfast and catching up with the X-Factor. A trip to the 3 Crowns in Stoke Newington and dinner with all our lovely friends. I really miss everyone who lives down there and it was so lovely to get time to sit and catch up properly with Mark & Emma and Lewis and everyone. After we hung out with John for a bit laughing at clips on YouTube of Flight of the Conchords and Demetri Martin then after he left we went proper Sunday, snuggled down with cups of tea and watched Strictly Come Dancing and the X Factor results. Brilliant.

Monday we visited Tate Modern. London on Mondays is lovely, I'd recommend it. We saw the Pop Life exhibition which features Warhol and artists since and kind of focuses on art & money as it's theme. It was an exhibition which all four of us had mixed feelings about. There was some interesting stuff there, but a lot of it I didn't like or just couldn't really respond to as art. I touched this:

and set off an alarm. Oops. There was more Jeff Koons stuff there too, but a lot of it was just horrible graphic sexual images of him and his porn star wife. I can't really repsond to that. I really found the recreation of Keith Haring's pop-up shop intersting, particularly as I normally hate Haring's work and find it a bit trite and dull. Somehow seeing a room covered in it blasting out 80's hiphop made it suddenly feel relevant and fresh again. I also enjoyed seeing the Warhol stuff in the flesh and seeing two twins sat in front of Damien Hirst's Dot paintings - despite the fact that the exhibition made me dislike Damien Hirst overall. There were interesting ideas, but a lot of it left me a bit cold.

The best thing we saw was actually in the Turbine Hall.
"Miroslaw Balka's black hole at Tate Modern is terrifying, awe-inspiring and throught-provoking. It embraces you with a velvet chill." The Guardian
This is a really great summary of the black hole currently in the Turbine hall. You walk into a big construction, a bit like walking into the back of a lorry and inside it is blacker than night, blacker than anything I've ever seen. It's so dark it's almost a feeling rather than a sight. It's physically affecting and a bit scary. Read more here.

Anyway, this is turning into the longest post in the world ever. Basically, London was lovely, we saw some art, Anders heard some music, we caught up with friends and ate lovely food and were very well looked after by our wonderful hosts Jamie & Chloe. Five stars!

I've been so busy I've not had time to think about what gigs are coming up. Or to shout about them. I'm definitely going to this though. SHOULD BE A BELTER! 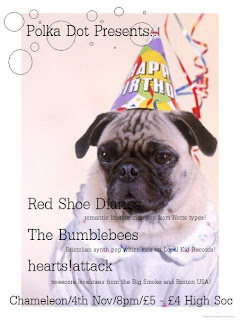 x Anders
Posted by Supernight at 02:33 No comments: