Do you think songs are too long and too boring? 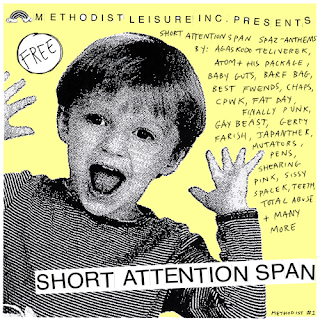 The brilliant brains behind Eat Yr Hands and Death By TV/Pork Swords/Maury Povich The Band/Squirrels have just released a frighteningly awesome compilation.

The whole thing is free to download and features the likes of Vivian Girls, Pens and Best Fwends doing their utmost to smash the shit out of whatever's at hand. Every day I have a new favourite. Today it's Sissy Spacek's thrash anthem Gore Jet 2

Please download it so that ML INC do it all over again very soon.
x Anders
Posted by Supernight at 05:16 No comments:

Stick with it through the first little bit, I think it's a bit messy early on, but then it levels out. It's actually a cover of a Lil Wayne tune from Tha Carter III, but I think perhaps I like this cover a bit more?

Maybe that's just because it's live and more immediate, or maybe it's because no Lil Wayne song can match up to "Mrs Officer" for me... I love that song!! I'd say it's a guilty pleasure, but I like it so much I don't even feel guilty about it:
http://www.youtube.com/watch?v=kohfsnvLTCY
ok, maybe I feel a little guilty about it...

Bex
x
Posted by Supernight at 02:16 No comments:

Being a bit of a marketing/design geek I regularly read lots of branding blogs and creative agency's websites. One of my faves is JKR and I was really heartened to see this story on there about Ben & Jerry's Hubby Hubby Ice Cream, a great bit of creative thinking and boost for sexual equality. Who knew ice cream tubs could make a stand!

For the record, I LOVE ice cream even more than mulling over marketing and design concepts so having ANOTHER reason to buy some delicious dairy naughtiness is good news to me!

A literal take on the masterpiece that is the Bonnie Tyler video for Total Eclipse of the Heart. Thanks to Sally for recommending this. I saved it up for a "working from home" day and laughed out loud at my desk in a room by myself... like a weirdo.

p.s. if you decide to watch some more the Aha one is ok, but definitely don't bother with the Nirvana one, it's dreadful!
Posted by Supernight at 09:10 No comments:

Anders is big into Micachu. Here's the new video. Not a massively exciting video, but a good tune:

Bex x
Posted by Supernight at 02:47 No comments:

I don't know about you, but I'm currently very much of the opinion that weddings are brilliant. Not only did Anders & me recently attend the very beautiful and wonderful wedding of our good friends Anna Ray & John, but we also celebrated our first wedding anniversary. Yay! Go us!

Anders got to DJ at the wedding and played some brilliant tunes to a room full of people high on wine & ceilidh dancing. The highlight for me wasn't Brass In Pocket (despite the fact that I drunkenly demanded it at an inopportune moment) it was the final tune of the night... We could've been anything that we wanted to be from Bugsy Malone. An inspired choice Anders, well done! I loved seeing the bride & groom dancing 20s-style with lots of happy friends & family - a golden moment. It also turned out that Anna Ray (like me) used to watch that film every day when she was little and knew all the words, so she loved it! What a great film it is too.

Anyway, here's a pic of us living it up at the wedding in beautiful Ross on Wye: 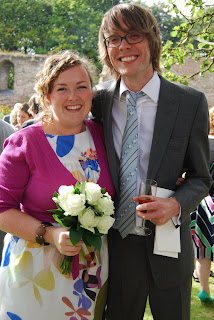 We also stayed in a lush cottage, got to hang out with lots of our wonderful friends who live in London and who we don't see very often AND we got to go canoeing in the rain. Magic.

Last weekend me n And popped up to Masham, which was where we got married last year. The Yorkshire Dales are brilliant. If you haven't been I'd recommend it. You can now get goat's cheese and probably even felafel, but that's all surface gloss, underneath it hasn't changed in 50 years. We went to the oldest sweetshop in Britain at Pateley Bridge and I reminisced about happy times there in my childhood. It's a lovely part of the country and very well stocked with tea & cake, if you like that sort of thing. We also discovered a mutual love of darts. Yep, me and Anders were living the high life on our anniversary! The only thing that was a bit weird was that I chose to take a book with me which turned out to be about a vaguely sinister boy living on the Yorkshire Moors (God's Own Country by Ross Raisin) which lent the whole weekend a slight air of menace somehow! This is it, I'd recommend it unless you're going to stay on the Moors for a romantic first anniversary weekend:

So, last night it was Anders' 32nd birthday (yes Anders, 32... not 31) and we met lots of dear friends in our local. I've been living practically next door to this pub for nearly 1 year and yet I haven't been in since before the smoking ban. That's bad isn't it? Anyway, we had a major darts tournament involving a game called "Killer" which is AMAZING and lots of darts bouncing off and hitting the floor. We were PRO. I nearly won apart from Bones had brought a ringer in and so Simon walked off with the glory. Still, at least I didn't go out first like Tom Whalley. SHAME!

I'll leave off this ramble now, hope you have a good week,

Becky
x
Posted by Supernight at 08:31 No comments: